More Children in Albuquerque, Other Cities Have Access to Summer Meals (But What About Rural Children?)

While New Mexico ranks at the very bottom on Feeding America's Map the Meal Gap index for child hunger, our state has received good marks for setting up sites for students who are out of school to find meals during the summer. The school year will be over in just a few weeks, and it's time to revisit the issue of summer meals for kids. 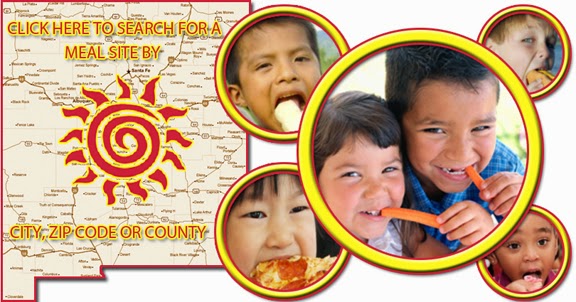 On May 1, Gov. Susana Martinez announced the 2014 Summer Foods Program, an effort that is conducted in partnership with the U.S. Department of Agriculture (USDA)'s Summer Food Service Program (SFSP).This year's SFSP program in New Mexico will run from June 1 to August 1.

Martinez boasted of her efforts to expand feeding sites since taking office in 2011. Under her administration, she said, the state has added 29 new summer-meal sites. “We have continued to expand this important program statewide, so that more New Mexico children have access to the high - quality and nutritious meals they need and deserve, even while school is not in session," said Gov. Martinez.

A press release issued by the governor's office acknowledged that nearly half those new sites are located in Bernalillo County, which means the Albuquerque area. Other than to mention the overall increase and the higher number of sites in Bernalillo County since 2011 (plus seven new ones overall this year), there was little information about the rest of the state.

So, if children in Albuquerque have good access to summer meals, what about children in other parts of the state? The answer can be found in the New Mexico Children Youth and Families Department (CYFD) Web site, which includes a very useful tool to search summer feeding sites. A quick search of the four options (by county, zip code, city, region) would suggest that it's much easier finding summer meal site in highly populated sectors of the state, including the Albuquerque, Santa Fe, Las Cruces, Las Vegas, Taos and Gallup. A search by zip codes also indicated that a large number of the feeding sites are located along the Rio Grande corridor.

The search also provided a major deficiency in New Mexico. I discovered that there was not a single county in southwestern region of the state! Other than Silver City, this is a generally rural area. And there was no summer feeding site listed for Silver City! I also tried the search by zip code. There were not sites in 88036--which includes Silver City and Fort Bayard. And feeding sites were also lacking in zip codes 88030 (Deming) and 88045 (Lordsburg).  Some locations like Santa Rosa in Guadalupe County were lucky to have one feeding site. And to be fair, there were multiple feeding sites in Rio Arriba and McKinley Counties, which also include some very poor rural areas.

The program keeps children from going hungry in areas that are served. In 2013, SFSP served 91,000 more breakfasts than in 2010, and 23,000 more lunches. For 2014, statewide sponsoring organizations are expecting to serve more than 2.1 million meals across New Mexico.

While we applaud Gov. Martinez's willingness to work with USDA's SFPS program to ensure that children in our state have access to summer meals, there needs to be more attention to expanding the program to underserved areas. After all, one of the reasons for the very high rate of child hunger  in our state is rural poverty.

(By the way, the SFPS provides a list of agencies in other states that provide summer meals for children.  And here is link to a great article that Kevin Concannon, USDA Under Secretary for Food, Nutrition and Consumer Services, wrote about the program).
Posted by BreadNM Blog at Saturday, May 03, 2014